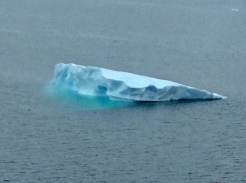 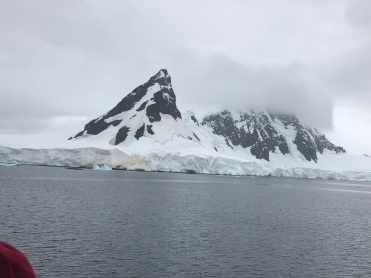 Barbara Rodgers on the Heliport

Compliments Galore in the Tees I Designed

A Rarely Seen Rainbow in These Parts

As most of you know, the doctors clipped my wings. I was advised to avoid flying and high altitudes just 1 week before departure,  This would have been my 7th Continent as it is for several in our group of 24, however,  at least 5 are missing from the photo shoot along with yours truly.   Occasionally, I got a report as to how things were going and at times I must admit I was saddened to have missed such an epic adventure.    A big thank you to Lucille, Juanita, Shonda and Barbara for sharing a few photos of their photos with me.

Antarctica, is  the earth’s southern most continent. It contains the geographic South Pole. For comparison, it is nearly twice the size of Australia, 98% is covered by ice and on average it is the coldest, driest, windiest continent. 18 months ago When I mentioned this 14 night cruise to Karla Michelle; she gave her usual chuckle and said, “Mama Kat, the last time I heard that word I was in elementary school” . Lol.  Well 23 brave souls thugged it out, flew to Buenos Aires, Argentina to join the Celebrity cruise ship to embark upon this amazing adventure.

Two photos you see are of Elephant Island — an ice covered mountainous island off the coast of Antarctica in the outer reaches of the South Shetland Islands in the Southern  Ocean.  It’s name was given by early explorers sighting elephant seals on its shores.

This will more than likely be it for Antarctica. I hope you enjoy the photos.     I’m still recuperating and I’m determined not to miss my 4 trip next month to Vietnam.  We will hit North, Central and South  —- all so very different.

You know how hard you’ve been working even if no one else seems to recognize it.  Take a break because you deserve it. After all, it’s Mother’s Day week so come on and join us for the best fun and relaxation.  Tree House Resort sits smack dab in the middle of Negril’s famous Seven Mile Beach. Your room is just steps away from where the sand meets the sea.    Wake up every morning in paradise breathing unpolluted air and where your daily breakfast is the best around. We have a fun-filled week planned for you:  A gospel brunch, sunset cruise, jazz and cocktails, a day at the waterfalls, and a dinner party with open bar.

Monday, I will release all unsold rooms, after that, you will be out of luck.  Call today to reserve your space —- Standard Garden Room $910pp dbl occ.

Well 3 of my doctors have clipped my wings and advised me weeks ago not to fly and to avoid high altitudes.  I admit I have been stubborn and kept it moving and kept on flying  but now I’m listening and I will not make the Antarctica cruise which required flying to Buenos Aires, Argentina  by way of  Toronto, Canada this coming Friday.  Yes, a whole lot flying that would have been for me.  Just know, I’m planning to make all of my upcoming doctors appointments and get tons of rest.

However, While I’m grounded I must continue to be about my Fathers business with my prison ministry.  I am asking for your help.  We have so many sons, brothers, husbands, nephews and  fathers in prison serving life sentences as non violent offenders.  Way too much time!!

Please show your support in approving the Sentence Reform Corrections Act Bill S.1917 That is being voted on this Thursday 2/15 by  calling (202) 224-3121 Monday to Wednesday.     Ask for your respective  Senator in your state. (in Calif it’s Harris and Feinstein).    If passed non violent life sentences will be reduced to 25 years.

Thank you and God bless, Kat