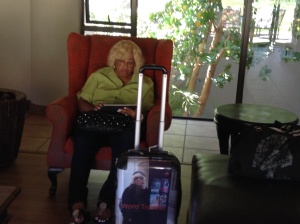 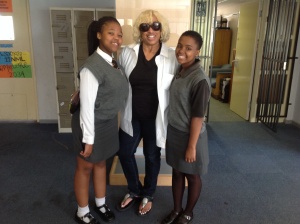 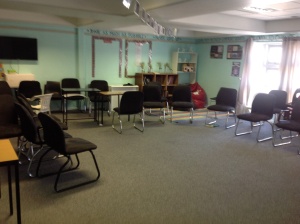 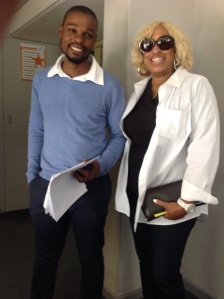 Today, my day was off to a great start at breakfast with those duck crepes wrapped around a little plum sauce and scallions —Yummy! The group would be going to Robben Island and then to Langa Township. I would pass on Robben Island and Langa since I’ve been many times. Remember, my love affair with Madiba began in 1967 when I was a senior in high school in Los Angeles and Mandela had only been in prison 3 years of the total 27 years. I cut class to attend a Free Nelson Mandela rally in Watts at Will Rogers Park, led by Activist, Stokely Carmichael. My plan was to go visit the LEAP Science and Math school in Pinelands where my childhood friend, Eugene Lemon of Oakland, Ca has spent his summers teaching children from some of the Townships. My dear friend Michelle Redding from the old Thoughts of Travel where I once worked, is part of this group. She had tons of school supplies including calculators and backpacks and health items including eyeglass readers, sunglasses, first aid kits, and oral hygiene items. It was like Jesus feeing the multitudes. She had already handed out to so many grateful residents in Soweto and still had plenty left to give away. I packed these items in my carryon and off I went to the school to meet with one of the Directors, deliver the supplies and get a tour of the school. This should have been on the itinerary for this group but things got hectic for me the last few months and it slipped my mind until Bay (aka Eugene) sent me an email last week asking if I would be visiting the school.

The school was about a $15 ride from the waterfront. The driver and I hit it off pretty good until his azz got lost, meter still running, I tried to be nice in telling him being lost wasn’t something I was paying for, turn off the meter. He was forcing my “alter”, Goldie, to come out of her cage. That is what he didnt want but got it anyway. Goldie let him have it with both barrels. After calling the school on her cell, got proper directions and upon safe arrival, fired the driver for the return trip, gave him a good tongue lashing and then threw his business card back into his vehicle. Goldie retreated back to her cage, Kat composed herself and into the school she strolled to handle the business at hand.

It quickly became evident how much love the staff and students had for Mr. Lemon. Mr. Babele (ba bee lee), a Director gave me an overview on the school’s program and then got 2 lovely 10th graders (Anelisa and Ziyanda) to give me a tour. One lives in the largest township, Khayelitsha and the other in Gugulethu. They both speak Afrikaans, Xhosa and English

We popped in and out of several classrooms — Math,English, IT, and Business. They both lit up when they explained the L.O. Class (Life Orientation). The chairs are arranged in a mcircle, they look forward to opening up to their peers and getting direction from their instructors. They are able to discuss sensitive topics they will not discuss with their mothers. The students are there from 830am to 5p. There are a couple of mothers that work magic by doctoring up the donated dry staples for the lunches that are provided for the students.

This school could certainly benefit from some fundraising and believe me, they are most deserving. You all will be hearing from me real soon about an upcoming project for the LEAP School.

After leaving the school, I stopped off at Green Market Square and picked up a few items then headed back to the hotel to chill on my balcony with pleasant thoughts of the days events and a perfect view of Table Mountain and the harbor.
Tomorrow: The Winelands, Lunch, Wine Tasting and a Surprise