My friends, my friends, a lot of you have been in my travel life for almost 3 decades and had I been such an unscrupulous, deceptive person, I doubt if you would still be with me. I am saddened that a disgruntled person that read and signed the “in black and white” Terms & Conditions for one of our tours decided to slander my name because she changed her mind after a few months. This is a first. I have taken literally hundreds of travelers all over the world, happily and satisfied with me as their guide. Those that have traveled with me know that I am not only more than fair but above reproach in all that I do in this travel game. Its a sad state of affairs when something of this nature happens.
So to you, my new followers as well as my loyal followers; I wanted you to have full disclosure in the event this person continues to attempt to tarnish my good name. Now, with the above being said… I will now prepare myself for the next exciting travel adventure to be shared with you… Return to Dubai, next month.

Most are still marveling at the awesome land tour we just experienced through the Italian countryside. If you missed out, you get another chance May 2015. But now for my most adventurous travelers in need of something new and different, we are going to AFRO-COLOMBIA in May 2016. It will be a 8-9 day reasonably priced tour.

First, you must toss aside your premonitions and stereotypes of a country of conflict, cartels and drug lords. They have largely disappeared. As you know that war is now much closer to our US border in Mexico. For Colombia that has been replaced by a rejuvenated capital of Bogota and a culture that refuses to be held back by the dark days. No matter where we travel to in this world we must always be on alert and use our street smarts. Egypt during the uprisings was no different for me and those that joined me. Those 2 trips were absolutely amazing, memories we will forever cherish. By the way, it’s just been determined that Egypt with cruise up the Nile River is being planned for November 2015.

In 2000 Colombia’s human rights movement came up with the month of May as Afro Colombian Heritage month to promote black awareness. We will visit Cali (ka-lee), the Afro Colombian capital offers a variety of cultural agendas to commemorate this event; social gatherings, music performances, Afro Colombian cuisine and artifacts. It is also called “Salsa City”, renowned for its high energy dance clubs. Just as there is the African element in jazz, there is the same element here in Salsa dancing. One fifth of Colombians have some African heritage and its one of the largest black populations outside of the African continent.

Also on the itinerary will be the capital city of Bogota, a city of contrasts — new and old, peaceful & frantic, century old plazas and churches shadowed by towering skyscrapers. Its a city that caters to a population that has been exposed to North American and European influences. Baby Boomers, do you remember the fictional character, Juan Valdez, the coffee farmer in the tv ads? Well, Colombia still remains the world’s best known producer of coffee; Bogota practically rains freshly brewed coffee. 60% of the worlds emeralds come from Colombia and can be purchased right in Bogota. In keeping with the best available dining experience, I will throw a cute little outfit in my suitcase to sample the fine dining of Harry Sasson or Matiz.

For the beach lovers, on the Caribbean coast, we find Santa Marta with her beautiful beaches and the contrast of the permanent snow-capped mountains of Sierra Nevada in the distance. You can bet we will be in a 5 star resort on the beach chillin out.
If you are interested in this adventure 2016, the Italian countryside tour May 2015 or Egypt November 2015 inbox me. Until next time….. 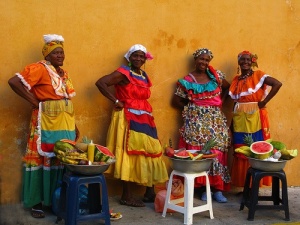 In Cali, The Church of Ermita

A Voyage To Bogota 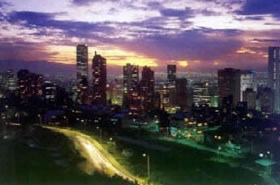